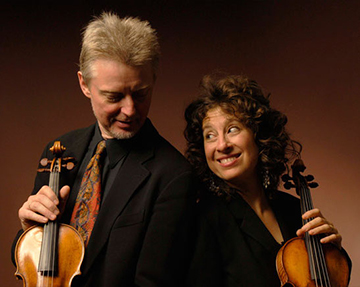 https://www.rebelbaroque.com/bmhome
The violinists of Black Marble are the co-directors of the internationally acclaimed baroque ensemble, REBEL, with whom they record and concertize extensively in the U.S. and abroad. The name ‘Black Marble’ derives from the English translation of their last names: Schwarz (German, for black) and Marmer (Dutch, for marble). The duo has performed at the Metropolitan Museum of Art, Kendal-on-Hudson Concert Series, and Midtown Concerts in New York City; in September 2010 Black Marble was featured on WQXR-FM’s ‘violin month’, in an interview and video performance hosted by Jeff Spurgeon.
The ensemble aims to explore the rich, virtuosic and rarely performed repertoire written for two violins by Leclair, Telemann, Reger, Spohr and Bartok, amongst others, on instruments and bows appropriate to their respective periods. The husband and wife team perform on equally well-matched Stainer violins dated 1660 and 1668, respectively.
Doors open at 7:00 PM. A $10 donation is requested at the door in support of The Friends of the Nyack Library who make this series possible.