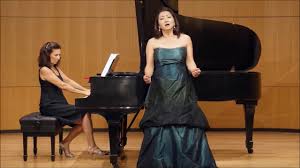 Based on the advice and guidance of Montefiore Nyack Hospital professionals, the Nyack Library is suspending all public programs. Given the hourly developments with the Coronavirus/COVID-19 epidemic, we think it is in the best interest of our patrons and staff to reduce the opportunity to exposure and spread of the disease. We have not learned of any cases of the disease linked to the Library, and we would like to keep it that way. To do so, we will need your cooperation and assistance. We will do our best to reschedule this program at a future date to be determined. We will notify you when this program has been rescheduled so you can be re-registered. If you have any questions or concerns, please contact our Programs Staff at 845-358-3370 x244 or email programs@nyacklibrary.org.
https://www.vocalartistsmgmt.com/kyunghee-kim
Soprano KYUNGHEE KIM has delighted audiences with her concert and operatic performances throughout Europe, Asia, Latin America and the United States.  Engagements this season include:  include: a solo recital at the Opera America National Opera Center in New York; soloist in Mozart’s Exultate, jubilate with Bergen Symphony Orchestra; Saint-Saëns’ Oratorio de Noël with Central Park West Presbyterian Church in New York; World Premiere Contemporary Music at Symphony Space in New York; appearances with Voce con Trio in New Jersey and Pennsylvania.  Other recent appearances:  soloist with Concierto Sinfonia de Gala in Lima, Peru; additional concerts in Mexico and New York; soloist in Bach’s Mass in B Minor with St. George Episcopal in Newburgh, NY.  Ms. Kim made her professional recital debut in her native Seoul, Korea, followed by a European debut in Vienna with the Richard Wagner Opera Society.  She has appeared many times in China, where one of her performances was the first professional Western recital ever presented in the Hunan province.
In recent seasons, Ms. Kim has been a soloist with Music from Above Foundation, teaching master classes and performing in orchestral and televised performances, such as Concierto con Orchestra Sinfonica Juvenile de Yucatan in Merida, Mexico; Anfiteatro Eva Peron del Parque Centenario in Argentina; Universidad Mariano Galvez in Guatemala and in Paraguay, as well as concerts in Turkey and Kazakhstan.

Known for her elegant interpretations, her opera roles, primarily performed with Teatro Carlo Felice, Lyric Opera of New Jersey and Bronx Opera, include Violetta in La Traviata, Mimi in La Bohème, the title role in Madama Butterfly, Liu in Turandot, Magda in La Rondine, Micäela in Carmen and Pamina in Die Zauberflöte.  As an oratorio/symphonic soloist, audiences have also enjoyed her performances of Beethoven’s Ninth Symphony, Haydn’s The Creation, Mendelssohn’s Elijah and Handel’s Messiah at esteemed venues, including Avery Fisher Hall (at Lincoln Center) and Carnegie Hall.

As a frequent soloist with Westchester Symphonic Winds in New York, Ms. Kim most recently performed in a program entitled Ayre & Space, as well as singing in Washington, DC’s One Month Festival, a program featuring performing artists in 27 countries over a one month period.

Ms. Kim received her Bachelor’s degree from Seoul National University and her Master’s degree in Voice from the Manhattan School of Music.